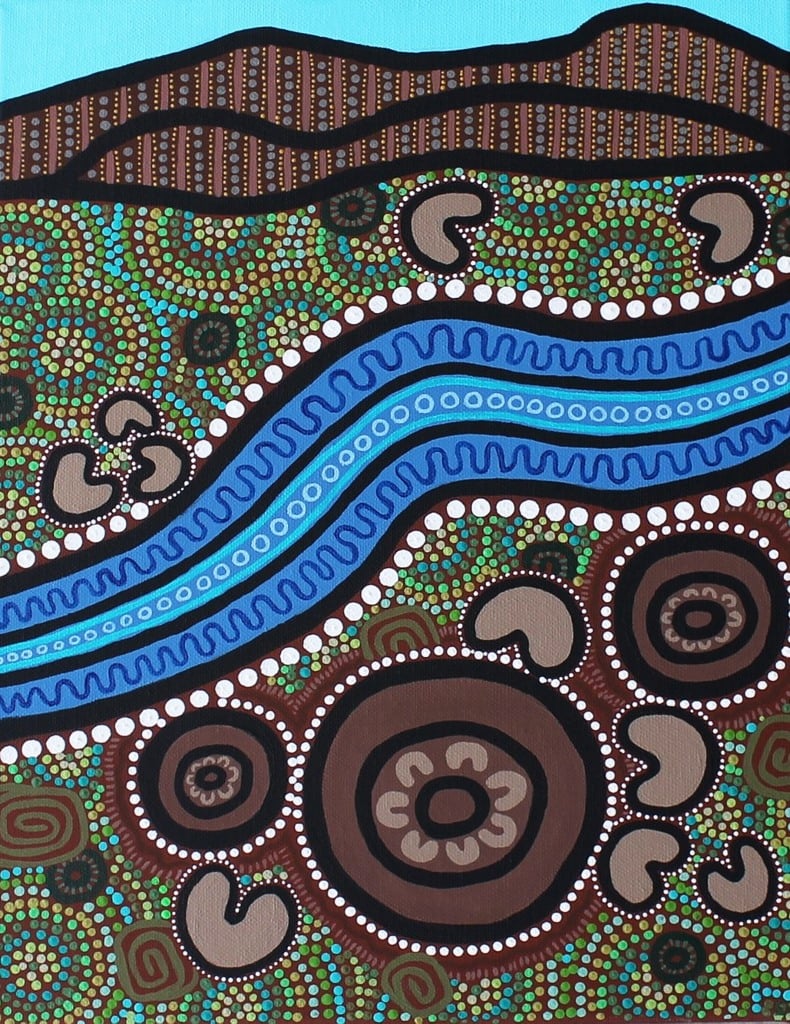 Once one of the most important river ports in NSW and an instrumental part of the development of the entire Hunter Valley, the township of Morpeth, will commemorate the bicentenary of its founding by Lieutenant Edward Charles Close, November 20 & 21st, 2021.

Her Wonnarua acrylic on canvas artwork created for Morpeth’s Bicentenary celebrations represents the Barrington Tops National Park Mountains seen in the distance from Morpeth.  Morpeth’s ‘Green Hills’, the Hunter River and the Wonnarua people meeting, in the lower right hand corner of the artwork.

This artwork has been reproduced onto Australian made tea towels & greeting cards, glasses cases, coin purses, microfiber cleaning cloths & computer mouse mats made in France, that will be available for sale over the weekend.  Watch Emily painting at her easel.  Children can colour in their own dot painting, based on Wonnarrua dreamtime legends.

The Wonnarua people are the traditional land owners and custodians of the Morpeth area and their lands extend throughout the Hunter Valley.  Their creation spirit is Baiami, also known as Koin, the creator of all things and the Keeper of the Valley. A dreamtime story from the Wonnarua explains how the hills and rivers in the Hunter Valley were created by a spirit called Baiame.

The Great Spirit Baiame opened his eyes that were steeped in chasms of eternity.  He and his creation spirits began creating the hills, valleys, forests & all living things, in and around Maitland.

Wonnarua people told how the Hunter Valley came to be, but in those star lit times, Baiame noticed something was missing from the valley floor, something to sustain the life that was already created. The valley floor parted and a mighty river was created. What was to be the keeper of life now flowed and the land was ready.  He then gave the people their laws of life, traditions, songs and culture.

Wonnarua traditional territory extends over 2,000 hectares spreading from the Upper Hunter River above Maitland, west to the Great Dividing Range towards Wollombi.

The meeting place for the Wonnarua and five other nations was at Kurri Kurri.  The Wonnarua, at the beginning of contact with whites, are estimated to have numbered around 500 people. Jackey Jackey a guide & companion to surveyor Edmund Kennedy, was from the Wonnarua.